Eben Uptons's Pycon keynote speech reminded me that the Raspberry Pi project was all about getting kids in to coding.  To date, I'd got the kids interested in the Pi through things like the Pi controlled Lego car and they love Minecraft, but I couldn't say that we'd done some proper coding.

The answer was to do more with Scratch and we tinkered around with it and (my six year old in particular - she calls Scratch "Kitty-Cat") enjoyed this.  We got the sprite to move around, react to keyboard presses and say stuff.  Interesting to them but not super-exciting.

I decided we'd need to do some stuff with the GPIO to make it more interesting.  This brilliant blog posting from SimpleSi explains how to do it.  Full marks to him for doing this, it's excellent.

My first try was to build a Lego disco; it's shown on the picture below.  On the picture you can see:
-The disco lights (bottom middle)
-The motors for the glitter balls
-The funky dance floor 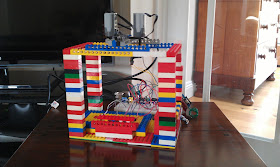 ...a view of the wiring and soldering, (so it's simply some jumper wires from the GPIO onto a bread-board, through some resistors and then to the LEDs: 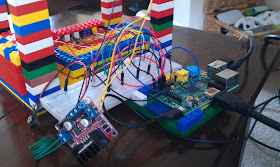 Using Scratch GPIO control we could:
-Set up different light sequences.
-Turn the glitter ball motors on and off.
-Compose some music.

Here's an example of a light sequence and music, (not sure how to export Scratch code other than this!!): 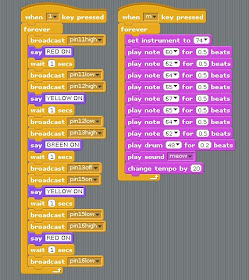 ...and two light sequences plus a method to piece multiple sequences together.  The "when 3 key pressed" block is almost like a main procedure that calls two sub-routines.  I like it! 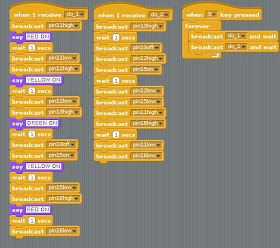 The kids liked this but didn't find it super-exciting.  There's only so many ways you piece together light sequences and making the music is a little laborious.  For some reason, making the LEDs flash left to right then right to left like KITT / a Cylon didn't excite them!

So the next plan was to create a game where the LEDs flashed in a sequence and you win by pressing the space bar when the central LED is lit.  Here's the code, segment by segment.  First, pressing G gets you in to the loop shown below: 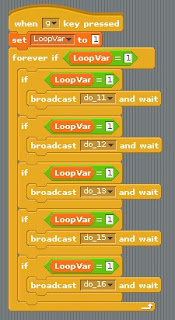 The code segments that receive the broadcast messages are shown below:

So the code receives the broadcasts, sets a variable that can be checked to see if the LED is lit, lights the LED, pauses then turns the LED off.

The final code segment handles detecting when the space bar is pressed: So when the space bar is pressed:
-LoopVar is set to 0 to come out of the "G" loop, (the "if LoopVar = 1" checks in the "G" loop means we don't light the LEDs for the remainder of the loop)
-We check which LED is lit.
-If the centre LED is lit (GPIO output 13) then you get a you've "won message", the LED flashes and a happy sound is played.
-If other LEDs are lit then you get a "you've lost" message and the Kitty Cat meows.

The kids enjoyed playing the game and tinkering with the code.  We changed timer variables, changed the words that Kitty Cat says, changed the sounds made when winning and losing and changed loop variables, (i.e. play sounds more/less when you win).

(They subsequently said "can we play Minecraft" so there's still some work to do...)
Geek Dad at 16:46
Share